I thought it would be a good test to bring the Amazon Fire Stick on vacation. The Fire Stick prompted me for the hotel free internet and I was able to quickly see our movies. But I needed to stream the iPad as well. This is where the issue was. The hotel network wasn’t allowing the devices to see each other on the same wireless network.

Windows 10 hot spot to the rescue. These commands should work on most Windows 8/10 computers to enable the hot spot.

Using a new HP Spectre laptop I wasn’t able to complete the last 2 commands as it was throwing an error: ” the hosted network couldn’t be started. The group or resource is not in the correct state to perform the requested operation.”

I happened to have a extra Cisco AE1200 USB wireless stick in my bag that allowed me to share the wireless network.  this allowed me to connect the Amazon Fire stick to my laptop, pair the iPad with the laptop and stream my content to the TV. This option would work with a Apple TV as well or any other network streaming device on a shared wireless network that is out of your control.

Nice option when there is nothing on TV in the hotel!

I needed to blog about this as this is a setting that should be exposed without registry settings, but for now that is all we have.

On 10/31/14 AT&T published a version of SoftCard to the Windows Phone Store. I am curious about this app as it seems like AT&T was blocking the use of their SIM Cards with Nokia’s NFC Wallet application to NFC payments.  I think that is a positive move for the other mobile platforms and offers competition for ApplePay.

Here are a few pictures during the installation. It offers a location finder to where the services can be used. Looks like similar locations that were just upgraded to ApplePay as well. Some people have posted that SoftCard has quit working at WalGreens and other locations that have upgraded their hardware, so this will be interesting to test out. 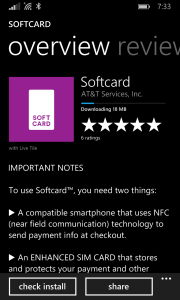 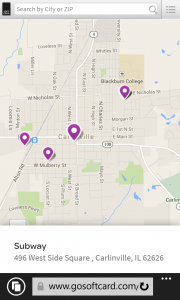 Here is the description from the Windows Store app about the software.

To use Softcard™, you need two things:
▶ A compatible smartphone that uses NFC (near field communication) technology to send payment info at checkout.

▶ An ENHANCED SIM CARD that stores and protects your payment and other sensitive payment information.

To find out if you have what you need, visit https://www.GoSoftcard.com or http://www.att.com/softcard.

SOFTCARD—THE WAY TO PAY WITH YOUR PHONE
Softcard is a free* app available for use with many of the latest smartphones.
▶ PAYMENTS: Add eligible payment cards and get all the benefits and protections you would with your physical card. Or setup a prepaid account and add money to it with your preferred debit card, credit card or U.S. bank account.**
▶ OFFERS: Find money-saving offers from participating merchants—right on your phone and ready to use.
▶ LOYALTY: Store participating loyalty cards and cut the clutter.
Plus, Softcard features state-of-the-art technology and layers of security to protect your information.

HOW TO PAY
Paying with your phone is easy.
1. Open Softcard and enter your PIN
2. Select a payment card to use
3. Hold the back of your phone over the contactless symbol on the terminal at checkout

WHERE TO PAY
You can use Softcard to pay anywhere contactless payments are accepted – that’s over 200,000 locations nationwide!

If it is true that McDonalds is implementing this nationwide then that will help push some of the other fast food companies to follow suite.

I contacted AT&T corporate today and the representative was clueless about the SoftCard by AT&T as well as the process to request a secure SIM card. I hung up and contacted the Springfield IL AT&T corporate store and got a much different response.

Not only did the store representative know what I was talking about. He said he has been using it for some time at WalGreens, CVS, and McDonalds. He said that any corporate should have them in stock.  I will try to grab one tomorrow if possible.

Day two and I am still learning more about the band. I was able to make it all night without any discomfort with the band. The negative reviews continue to fall in as people are comparing it to handcuffs or ankle bracelets. Maybe those people that have been in handcuffs and ankle bracelets aren’t cut out for this device?

I know I didn’t sleep well in general last night and this pretty much nailed my expectations. 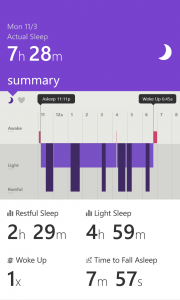 I was able to create a VIP email list to help filter which emails show up on the phone and also play with the watch option that keeps the time dimmed on the face at all times. Some were reporting that at night this is still too bright. I’ll find out tonight.

I’ll try to compare the “steps” tomorrow against an Ormon Pedometer which was more accurate than the Fitbit Flex band. But my steps today were pretty average around 4,000 just around the office.

So far my favorite feature is the intense vibration of the band before a meeting. my snooze button the phone was too easy to dismiss. This makes me get up an get to the meeting on time.

The weather app was on target today as it rained all day!

I am not disappointed at all with this device so far. 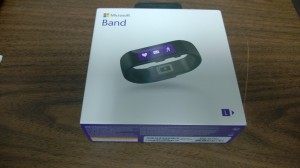 Microsoft did a great job with the boxing of the Microsoft Band it looks professional just like the Surface boxing. 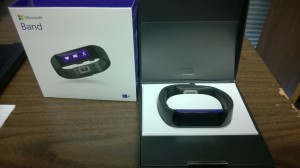 The first impression of the device is, “Wow, this isn’t a cheap plastic band.”   To start the pairing of the device, plug it into USB power. 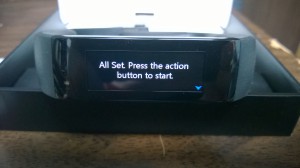 Download the appropriate application for your phone. Mine was the Microsoft Health app for Windows Phone 8.1 (Lumia 920).

The syncing seemed to work but then the band would disconnect from the Windows Phone.

When I started the Microsoft Health app it asked me to download the Windows Phone Preview to enable the newer Bluetooth options. Side note this update also includes some great features for the Start screen allowing better grouping of applications 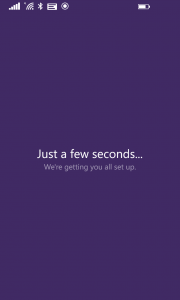 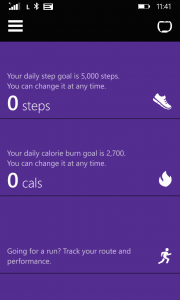 This took me right to the phone update to download and install the update. This took some time to download the update and then install it. I am guessing at least a half an hour. After the phone reboots I got worried as it sat at a picture of 2 gears for a very long time, another half hour. But it eventually took off and started showing a completion line at the bottom. Bottom Line, Be Patient!!! 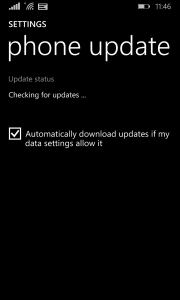 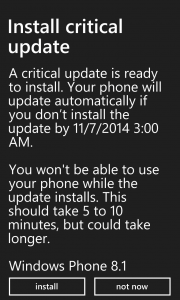 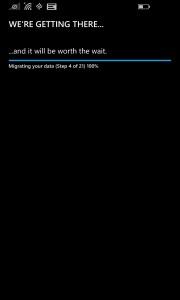 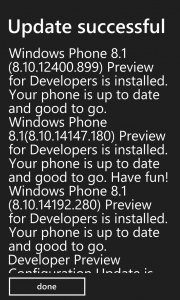 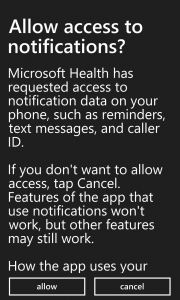 Once the software is installed you can change the applications that show on the tiles and drag and drop them to be in the right order that you want them to appear. If the application has the edit button next to it you can change some of the options. For example, you can make a VIP list for the email tile so you only get notifications for a list of up to 10 people. 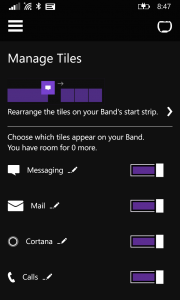 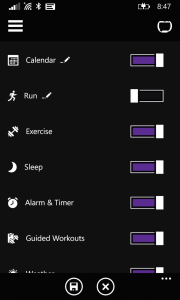 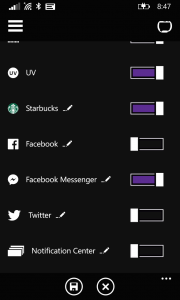 To change the order, press the icon of the band in the upper right hand corner of the screen. 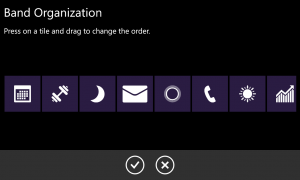 The Microsoft Band is very comfortable on my wrist and feels just like a watch.  Some reviews say that you are aware that it is on your wrist, and I feel that a bit, but I do with normal watches as well and this doesn’t bother me at all. The weight of it is perfect, lighter than normal watches that I’d wear. It is commutable wearing the Band on the top of the write or on the bottom. I have had it on the bottom of the wrist most of the day. Microsoft is handing out a Zagg screen cover in some stores. I bought just a cheap iPhone 4/5 screen cover and put it over the screen until I can go back to the store and pick one up.

I haven’t noticed that the Band picking up erroneous steps for just driving around in my SUV, something that the Polar and FitBit bands did do. The resting heartbeat is fun to watch as I type right now it is at 75 while it was over 105 during a engaged conference call earlier today.

The band is still showing a full charge after 8 hours, more than I can say about my Lumia 920. My phone was dying fast today with Bluetooth on so that might be a bigger concern than the Band’s battery.

I am anxious for the Band to interface with Microsoft Health & FitNesse or HealthVault. I am not much or a runner so some of the other built in apps might not do it for me quite yet. I did hook it up to MyFitNessPal, but haven’t quite learned how to integrate with it from the Band. I thought I saw an advertisement where a person was speaking into the Band, “I ate a candy bar” and it logged the food? I’ll need to find that and show an example if that is really possible. 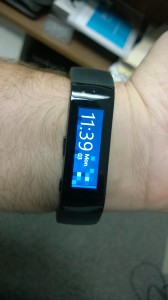 Last step for tonight, check out how the sleep tracking works. More tomorrow.