I enjoyed trying out the Microsoft Band 2 for three weeks. The wrist bands on the band are much more flexible and not rigid. The face curves around your wrist and feels like it is really like a watch band. The band was noticeably wider to me and a large in the Microsoft Band 1 version is just a bit smaller than the Microsoft Band 2. The Band 2 was almost too large for me. The clasp is similar where it can glide over to a comfortable fit. I am impartial to the new clasp and charging mechanism. I was fine with the older clasp and never had an issue charging the device. 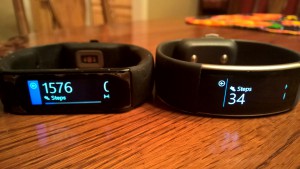 I prefer wearing the device on the inside of my wrist. Neither device bothered me while I type on the keyboard at a desktop or laptop. A watch always drove me nuts and could never wear one.  The Microsoft Band changed that for me. 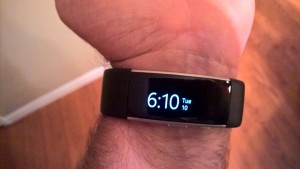 Here are my top Pro’s and Con’s for the devices. They were so similar to me there are only a few noticeable differences.

Pro’s – It is wider which meant that it was easier to read. The floors was fun to really see how many flights I went up a day. We were on vacation on without an elevator and that added up pretty quickly. 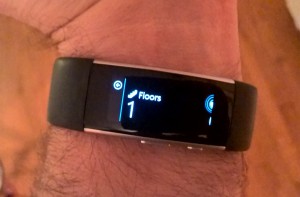 The buttons on the band are easier to use than the Band 1. The touch of sliding items to dismiss or accept messages seemed a bit different and harder to swipe over. But I didn’t have very many false swipes like I had on the Band 1. I did not have a screen protector on the Band 2 so maybe that was some of the difference in feel. The heart rate sensor changed in design and it is noticeably different with 2 probes that stick out. It seemed that the device locked in the heart beat a bit faster. 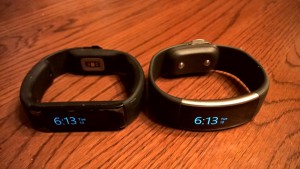 Con’s – The band didn’t hold a charge for more than 12 hours for me.  The band seemed brighter even on low which might be some of the cause for the drain on the battery. I used the watch mode ON for both bands and it really seemed like this new Band 2 can’t last as long.  Besides the floors feature I didn’t see the benefit of really moving to this device. The heartbeat and other sensors seemed to be the same to me and not worth the $250 to really keep up with the device. If the band lasted more than 1 day it might be worth keeping. But the #1 killer for returning the band was the curved glass was unreadable in the sun. The main thing I like using the band for was for playing golf. Not seeing the band for yardage killed it for me.

I hadn’t worn the Band 1 for 3 weeks now and I just put it back on and it actually feels really nice. it feels a bit lighter than the Band 2 and the slimness is noticeable.  Target just had the Band 1 on sale for $59 on Clearance for Black Friday, what a steal. Pick one up if you are in the market for a fitness band that does more than a Fitbit and at this point in time much cheaper.